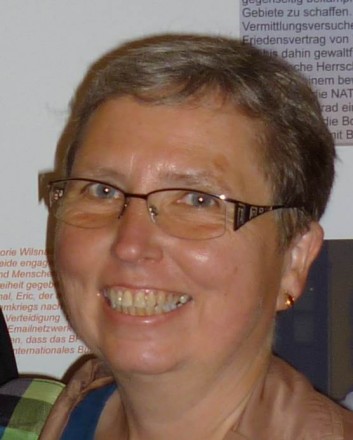 Dr. Christine Schweitzer, *1959 in Hamburg / Germany, has spent most of her professional life as coordinator in nonviolence and peace movements. She is a researcher at the “Institute for Peace Work and Nonviolent Conflict Transformation” (IFGK, www.ifgk.de) which she co-founded, part-time co-coordinator of the German organisation “Federation for Social Defence” (www.soziale-verteidigung.de), and editor of the bi-monthly magazine “Peace Forum” (www.friedenskooperative.de).

As an activist, she has been in the German peace movement since the early 1980s. Since the 1980s she is also a member of War Resisters’ International, and, since 2014, the chair of WRI.

She has co-founded and co-managed the international volunteer project “Balkan Peace Team” in the 1990s and worked as a Research and Program Director for “Nonviolent Peaceforce” most of the last decade. From that stems her interest in civilian peacekeeping – the protection of civilians in armed conflict by unarmed civilians being present on the ground – a topic she has published about.

Her other research interests include conflict transformation, nonviolence, civilian-based defence, strategies of peace movements, the Balkans and recently Syria, Russia and Ukraine. A list of publications can be found here: http://www.ifgk.de/vorstellung/mitarbeiterinnen-und-mitarbeiter/christine-schweitzer/